THE SECOND AMENDMENT: READ IT LIKE A FOUNDING FATHER 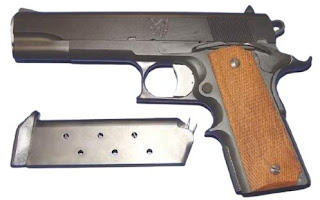 *The People* are recognized to have an inalienable right to keep and bear arms just in case some idiot politician decides to turn the power of government against them - *including* the power of the standing army and *well-regulated militia*.

We weep for those of you who have are un-educated, or who have been mal-educated, or who are otherwise cognitively challenged - but we will never surrender arms, and we pray you never make us turn them on you in self defense.

Now, for those who are capable of reading and comprehending - here's the article:

THE SECOND AMENDMENT: READ IT LIKE A FOUNDING FATHER

The Second Amendment: A well regulated Militia, being necessary

to the security of a free State, the right of

the people to keep and bear Arms, shall

The Second Amendment in our Constitution

is the most hotly debated topic regarding our

Natural Rights as Americans. The Second

Amendment is not only misunderstood, but

on both sides of the argument.

Leftists argue that the ‘…right of the people

to keep and bear arms…’ is intrinsically

and inseparably tied to the fi rst part of the

Amendment that states, ‘A well regulated

Militia, being necessary to the security of

a free State…’ – and they are absolutely,

They argue incorrectly, either by deliberate or

ignorant misunderstanding, that only those ‘…

people…’ who are part of the ‘…well regulated

militia…’ are entitled to bear arms. That is not

what the Amendment states – at all.

Here’s the bottom line: ‘…the right of the

people to keep and bear arms, shall not be

infringed…’ is precisely because the ‘…well

regulated militia…’ was newly defi ned as a

separate entity under the control of the US

Prior to the Revolutionary War, the commonly

understood defi nition of militia was all ablebodied

and constitutionally – in Article 1, Section

same Founders and Framers, who had just

and Colonial Militias, decided to formalize

the American Militia. They decided to make

it ‘Well Regulated’ as opposed to what

existed prior to the war. George Washington

understood intimately that the American

Militia system, to be useful to a General in the

field, had to evolve from what it was during

So, the Founders and Framers gave the new

Clause 15: To provide for calling forth the

militia to execute the laws of the union,

Clause 16: To provide for organizing,

arming, and disciplining, the militia, and

for governing such part of them as may

be employed in the service of the United

States, reserving to the states respectively,

the appointment of the offi cers, and the

authority of training the militia according to

the discipline prescribed by Congress;

the new defi nition of militia and militiamen.

Here is where the leftist & anti-gunner

The same Founders and Framers who, in the

regulated militia’ under State and Federal

control, also were fresh off the battlefi elds

against the British Standing Army and

and Framers knew that any standing army –

be it an American standing army or even an

American ‘Well regulated militia’ – could be

suddenly turned against ‘…the people…’

So, they drafted the Second Amendment and

crafted it very deliberately. They understood

that a ‘…well regulated militia…’ was essential

to America’s future. They also understood

that the possibility existed that one day, ‘…

from that new ‘…well regulated militia…’.

that today’s National Guard is the same

‘Well-regulated Militia’ established in the

Constitution. They are not wrong.

How many times have ‘…the people…’ been

in harm’s way because the federal, state or

local government has turned the power and

weapons under their authority against ‘…

the people…’? How many times have leftists

bellowed for ‘The Government’ to use force as

a means of imposing their will upon citizens?

Once again, the brilliance of our Founders

and Framers is right there for us to see.

They said: ‘…the right of the people to keep and

bear arms shall not be infringed…’ precisely

because we, the Founders and Framers, are

creating a ‘…well regulated militia, being

necessary to the security of a free state…’

people…’ who have an unalienable Natural

Right to defend themselves.

right to keep and bear arms.